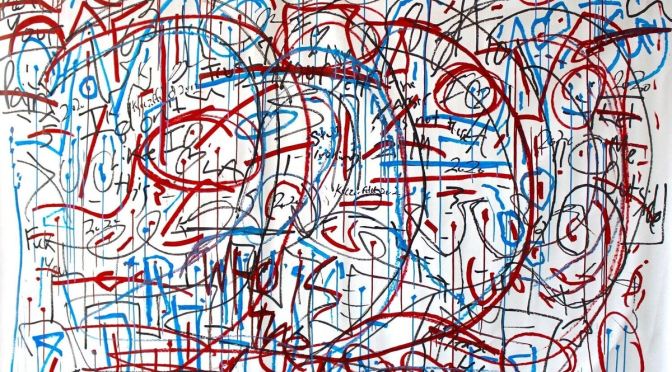 Keezerfeld, or Keez for short has kept his identity under wraps and not much is known about the artist to date. This story accounts for all the interviews he’s done so far. But by the time he found himself confined to his studio, so too were most other non-essential workers. Therefore, he was forced to create his pieces, which stretch to over five feet wide, with materials he could find at his local CVS or various corner stores. Having previously relied outside the box tools he was well-suited when he was pushed into creating larger than life works with markers, crayons, paint markers, pens and literally whatever he could find during the pandemic. He refers to the movements he utilizes as Thrash Expressionism.

“Pretty much everything non-conventional about the medium of painting, I lean into like I don’t use paintbrushes. I never really wanted to be confined to a vehicle for distributing the paint. I want the paint to get onto the canvas in the most authentic way it can get there and I’ve always been very consumed with this idea of confident motion,” Keezerfeld said. “Once the pandemic started it totally changed how I approached painting. So I started experimenting with so many different paint markers, pens, sharpies, and anything that was available and I just started to document what we were experimenting week to week.”

As 2020 wore on, the stay-at-home orders evolved, so too did the pandemic; and Keezerfeld’s paintings.

Thinking back on it, each week seemed to have a different theme, a new development, a different aspect that drove the narrative in a new unforeseen direction. He was paying attention and creating a reflection that attempted to explain the thoughts and feelings we were all having at the time as it happened.

The point of art in general is to make sense or add context to things in our lives. In that sense, Keezerfeld has accomplished this. His work is distinctly abstract, leaning on the emotion evoked through varied lines and opaque characters. If there was one consistency to 2020, it was confusion and misunderstanding; and his works evoke this uncertainty in a way that’s understandable from first viewing. The use of found materials accentuates the point further, a nod to having to make due with whatever you can in a time of need. In a sense, the collection walks a viewer through an amalgamation of thoughts, ideas, anxieties and fake news or whatever else that flowed between our ears as we dealt with our cabin fever.

“At the beginning of the pandemic we knew something had changed. We didn’t know for how long. But that experience of what I experienced at that time is meant to be like a reminder of what we all experienced,” Keezerfeld said. “I think we all kind of forget how we got to how we got here. Those forty-five days, these eight or nine paintings are the reflection of that time.”

The Floyd murder though changed things and while his piece “The View From Space” focuses on the ev ent, it became clear that reality had outrun the ability of art to understand it. The moment was a sort of breaking point for the nation and the story Keez was telling, as a result he made that particular piece a standalone work, effectively ending the Quarantine Chronicles as a series.

The first painting in TQC was created a little over a year ago. A lot has happened in the time since and making sense of it is often a maze of headlines, tweets; protests and sieges. The one thing we can all agree on is that everyone is different from it. The world is too. Everyday cryptocurrencies and “stonks” have been having a bigger impact on the world at large. Recently, Non-Fungible Tokens or NFTs for short have become the trendy buzzword. Essentially acting as a way to buy into an initial digital offering of an existing work, NFTs allow others to more or less buy into the works. With a project that centered so fully on the overall story of how we were all attempting to deal with a once ina century situation, opening up the ownership to the public only made sense. It also allows an additional layer to depth for a project that looks both inward and outward simultaneously.

“I wanted to give people an opportunity to not just own a party of the artwork, but a part of a psychological commentary on something that we all experienced,” Keezerfeld said. “ The evolutions of blockchain technology have not just enabled folks to own physical art, but own the interpretation or meaning of the art as well.”

With hundreds of millions of vaccines already administered, it seems the world might be getting back to a semblance of normal. There was a lot of talk during lockdown orders of what folks would do with their time. For his part, Keez can consider it time well-spent. His debut work accomplishes what many strive for: represent true meaning that resonates with everyone. He accomplished this by telling the story of the moment the lockdown started and how our collective psyches changed throughout the ten weeks following. Now, he’s re-entering society like the rest of us and looking for a physical space to debut.

With life getting back to how it was though, he has no intentions to stop anytime soon.

“I set out to try to tell the story we were all going through at a crazy time in the world,” said Keezerfeld. “I’m a person who likes to exert experience onto the canvas and what I was observing and this was almost like my grieving the way that we used to be. I’m just excited to be through it and have this opportunity to share this in the real world.”