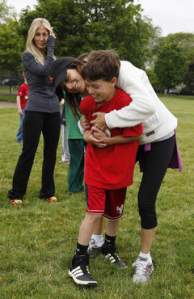 Moms and dads in sweats and gym shoes exchanged nervous smiles and raised eyebrows as a dozen third graders skipped into the brightly lit gymnasium of Glencoe’s West School, grabbing their parent’s hands and pulling them into the fray amid a collective smile.

May 21-28 marks Fitness Week for District 35’s West School, allowing a chance for parents to drop in throughout the week and participate in physical education classes with their kids. Fitness has been celebrated across the district this month.

“Instead of just having parents watch, we like to get them involved and see things first hand,” said physical education teacher Hillary Lee.

Lining up cross-legged on the floor, students and parents listened intently as Lee explained the rules of the soccer game they were to play, a warning to be careful seeming to be meant more for the parents than the kids.

“We had one dad go down earlier today,” Lee said. “But he was fine, the kids got a good laugh.”

After instructions, parents and kids moved out to the fields surrounding the school for the game, dividing into teams of red and blue.

Students at West School normally participate in PE four days a week and while it is not required for parents to attend, many show up several times throughout Fitness Week to spend time in class.

“This is my tenth year doing this,” said mother Becca Friedland. “It’s a great way to come out and show kids that exercise can be fun.”

As a nine year old in a Blackhawks shirt dribbled past a mom in yoga pants Lee explained that the program, which has been around for more than 20 years, is a great way for families to spend quality time together while advocating for a healthy lifestyle.

The week also comes on the heels of a visit to Chicago by First Lady Michelle Obama for the NATO Summit, herself a large supporter of healthy lifestyle choices through her “Let’s Move” campaign.

While Lee says she feels most of the students have no problem living healthy, it never hurts to have an adult role model to follow, hence bringing in parents and other family members.

One participant, grandmother Beatrice Cho, arrived at the school while still getting acclimated from a long trip to Korea early last week.

“My schedule has been so crazy since we got back that I’ve hardly slept, but I made a point to make it here for my granddaughter,” Cho said.

The kids also enjoy the competition.

“It’s fun to play with my mom because she’s better than me at soccer,” third-grader Shane Michelon said. “Plus she always passes me the ball.”

At the end of the half hour class both teams met in the middle, exchanging high fives and hugs. As they filed out of the field and back to the gym two of themothers glanced at each other with smiles on their faces.