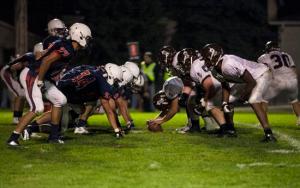 Joliet Catholic senior running back Ty Isaac returned from a shoulder injury to spark the Hilltoppers to a 33-20 win over host St. Viator Friday.

Joliet Catholic senior running back Ty Isaac may not have started the game for the Hilltoppers Friday night, but he sure finished it.

Isaac ran for 94 yards and two touchdowns en route to a 33-20 win over St. Viator at Forest View field in Arlington Heights.

With Isaac not expected to play while nursing a sore shoulder, the first half was an even matchup as senior running back Tyler Reitz rushed for 43 yards and junior fullback Michael Ivlow punched in a pair of touchdowns to put Joliet Catholic up 13-6.

With the score close and St. Viator picking up steam, Hilltoppers coach Dan Sharp made the decision to go with the USC-bound Isaac late in the second quarter.

“To be honest I wasn’t supposed to even play in this game,” said Isaac who was unsure of his status almost until kickoff time. “I felt like [the shoulder] progressed pretty well to the point if the team needed me I could come in. It’s much better than it was last week.”

Isaac pumped life into the Joliet Catholic offense by converting on several long third- and fourth-down situations, capping the second drive of the second half with a 15-yard touchdown run to break a 13-13 tie.

The fourth quarter belonged to the Hilltoppers as St. Viator struggled to find an answer on the offensive end. An interception by junior Zack Jackovich early in the quarter set Joliet Catholic up to go 27-13 on a Ivlow touchdown. Jackovich finished the night with three picks.

The Lions tied the score at 13-13 with under four minutes in the third quarter, but the Joliet Catholic defense stopped the rally, outscoring the home team 20-7 over the remainder of the contest.

“If we play like this every game good things are going to happen to us,” St. Viator coach Brendan New said. “It’s frustrating, to play so hard and come up on the short end but they’re a great team.”

Joliet Catholic has its horse back and now focuses on conference foe Nazareth for homecoming next week.

“For the past few years we haven’t been the most talented or the biggest but as a group we all fight,” Isaac said. “Without that we wouldn’t be able to do what we do.”