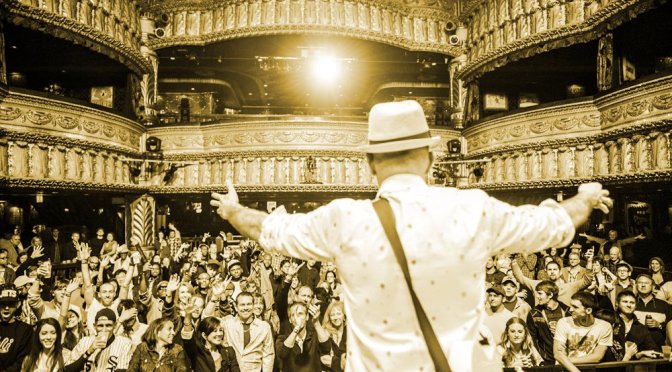 There aren’t a lot of bands doing what Lotus does.

As the laptop increasingly slides into the role of introductory musical instrument that the guitar has held for generations, jam bands like Lotus have slowly become less prevalent.

Lotus isn’t just any jam band though. Through a mix of syncopated improvisation ala Umphrey’s Magee and computer-generated sounds the group has been able to carve out it’s own sound it dubs jamtronica.

The unique sound arrives for two nights in Chicago with a back to back showcase at the Riviera Theater December 27 and 28 as part of their five-night New Year’s Eve tour that starts in Chicago and ends on the 31st with a show in Baltimore.

“We often do several shows leading up to New Year’s but this might be the most we’ve done in a row,” said Jesse Miller (bass/sampler). “It was a good chance for us to get out and play a number of shows in

cities we haven’t played ina while.”

The two-night run at the Riviera will surely feature the band’s endless onstage jamming that will touch on their extensive catalog, both old and new paired with an inspired light show.

“We try to draw the crowd into the human element of the show,” said Luke Miller (guitar/keyboards). “[The lighting] is a very powerful part of our show and our lighting guy has been with us since the beginning so he’s locked into our improvisation.”

Lotus closes out 2012 with its eye on the future, including plans for at least two albums and maybe a third that is still in production dropping in 2013.

“I think it’s going to be a celebration, a celebration of the new year,” said Jesse. “It’s a great opportunity to get a bunch of people in some cool rooms and have a good time.”

New Year’s Eve will be Chris Mathien and Co.’s second time playing a concert as they ring in the New Year at Reggie’s Rock Joint for a 21+over show.

With that experience behind them, they kind of know what to expect.

“We performed two years ago at Reggie’s and we were supposed to do the countdown at midnight,” said lead singer/guitarist Mathien. “Everyone’s cell phone was on a different time so people were kind of celebrating sporadically while we counted off.”

That was two years ago.

Since then the band, consisting of Mathien and drummer Omar Jahwar, bassist Erik Kaldahl and keyboardist Peter CottonTale (Wilkins), which performs under their lead singer’s surname has figured a few things out.

After starting the band as a college student at Southern Illinois University, Chris Mathien moved north to Chicago and met CottonTale, a gifted musician who he immediately added to the band’s lineup nearly three years ago.

“I grew up playing Jazz and Soul but then I found this Rock/Funk, Maroon 5-sounding guy,” said CottonTale. “But it was a smooth transition musically because I understood where he was coming from.”

With the end of the year quickly approaching, mathien has been sure to plan out the show carefully will be handing out 100 free CDs with an unreleased new single, as well as polishing that countdown.

“I think we’re going to put an official countdown on the stage somewhere this time to avoid confusion,” said Mathien. “We’re excited to have the chance to rung in the New Year in Chicago.”

“I’m looking forward to returning to Chicago, when I was there last it was a beautiful time,” said Bradley.

The funk/soul singer got his break in music late, at age 49, performing as a James Brown impersonator under the name “Black Velvet.” Noticed by Daptone Records, the Otis Redding-like vocalist has since recorded several albums with another one on the way in 2013.

For all it’s history in Blues and Jazz, Chicago seems like the perfect place for Bradley to land for a beginning to the New Year.

“I’ve been pushing for a long time for this opportunity,” said Bradley. “I am taking that opportunity and making the most of it, I want to show everyone at these shows what I can do and show them all the love I have.”