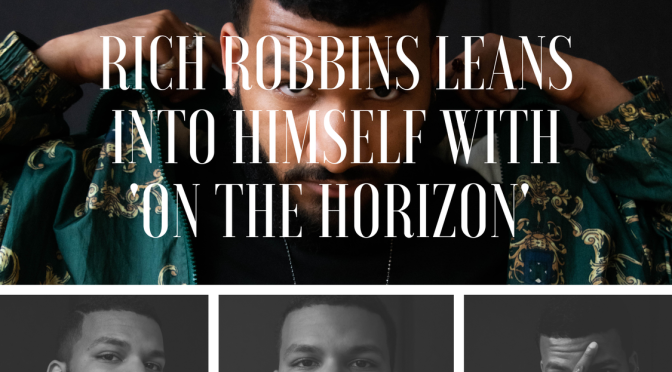 For Chicago artist Rich Robbins, music is a journey.

Anyone who creates anything uses their own experiences to make it, but Robbins truly pours his soul into his work. Navigating this thing called life while dealing with inner monologues, anxiety, and the general sense of possible failure, Robbins mines his reality to create a sonic dissonance that connects his listeners to what he he was feeling in a moment. But, it also gives way to a larger thought experiment on actually giving it a shot regardless of the consequences. It’s what he refers to as a fluid cycle of inspiration.

The best part is, in an age when self-care and shortcomings are often manufactured, Robbins wears his heart on his sleeve and lets things come as they should.

Albums manifest when they’re supposed to. Not to meet a date. It’s in that sense that he’s preparing for the release of his first full-length in three years. The latest collection of songs is a true evolution for an artist seeking it out and plays with the age-old question of what constitutes a rapper really?

Regardless of how you answer the question ones thing is for sure: Robbins makes music for himself and listeners that come along. But the most important part is the connections made and the steps taken with each release.

“This project I think was important because I was like: I like all of these different types of music, how can I weave these all together but still make this sound familiar,” said Robbins over an interview in the Flat Iron building on Milwaukee Ave. “I had experimented a lot right before quarantine with all sorts of music, just some shit that was never going to end up on a project and this I think is kind of the realization of what all those experiments came out to be.”

Even on paper, Robbins stands out. The rapper capable of handling a hook started his career around the Chicagoland area before going to the University of Wisconsin where he earned a literal degree in hip-hop. Despite all that, Robbins finds himself still searching for a sound all his own while challenging the ideas that have brought him this far. The result is his latest album, On The Horizon (OTH).

Catching up with Robbins a few weeks ago in Wicker Park, his penchant for knowledge was easily identifiable. An easy soul who doesn’t require the spotlight but seems perfectly suited, he’s seemingly always asking questions, wanting to know more. It shows through in his music too. He parlayed his degree to a job working at Oak Park-River Forest High School just outside of Chicago’s western border, where he teaches spoken word poetry. It’s there that he both stays in touch with a younger generation, passes along wisdom, and, frankly learns himself.

“I didn’t want this to be so uplifting that it was preachy but I always encourage my students to show vs tell and I wanted to show potential with this collection,” explained Robbins.

Like those in his classes, Robbins is a true student of the game. He exists in a unique reality, old enough to operate in the real world, but with a job that allows him access to the creativity and ideas of a generation below him. Education allows one to see the marked growth in individuals over a period of time. Whatever the subject, if a teacher is doing a halfway decent job, the student should improve. That’s baked into the way Robbins views his music career. The word potential is brought up often, something he wanted to stress was a driving force for his latest work. The unique perspective is a matrix that OTH was born out of.

While working on the 11-song project, Robbins was taking songs to friends and colleagues just to workshop the lyrics, waking up late at night with the aha moment to change something else and tinkering with ideas long after he left the studio. It became obvious to him that he not only had to deliver something new for his fans but more so for himself. Finding himself on the proving grounds, he pushed further, unafraid to try on a new sound, scheme, or song.

“I would go back and edit verses and I never did that before like I wrote this shit, that’s what it is for the song. But I would get feedback on it and that’s where the familiarity comes from,” Robbins said. “I feel like in any mood I found myself in, there’s a song here to fit that vibe.”

It all culminates with the eleven-track project that serves as a sort of three-year checkpoint from his last release, 2018’s Red Butterfly. It was very much the kind of conscious-learning, storytelling album you might expect from someone with his pedigree. Where that project was lyric heavy, telling a story of a lost love and the path back to knowing one’s self, this project feels decidedly different in that way.

Instead of wandering, Robbins is purposely putting his foot forward. Each beat, line, and break feels intentional and the tone in which he approaches the songs is bolder, more assured in itself.

At the same time, he’s spreading out here, trying something new, giving listeners a full spectrum of what Rich Robbins could be. It was a point of emphasis for him in the creation process.

He’s doing just that on his latest project. OTH is a perfect exploration and an opportunity to watch an artist grow in real-time. When discussing the project, Robbins describes the fluid cycle of inspiration which he believes flows from him to his listeners and right back again. It’s why he makes the music he does, why he takes creative risks in pursuit of greatness. Because it’s his belief that it will all come full circle, and so far it seems to be working. At the end of the day, it’s all about the journey.

“I’m excited to hear the next album. I have no idea where it’s going to go and then I know the audience doesn’t have any idea of where it’s going to go and that’s what’s fun about all of this,” said Robbins. “I’m evolving as a person the same way we all are as people-we’re just naturally going to start doing different things. I think part of being a good artist is knowing that your audience is probably going through the same shit you’re going through.”