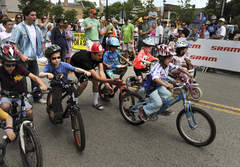 Streets throughout Glencoe were shut down Saturday as two wheels replaced four on the roads for the sixth annual Glencoe Grand Prix bike race.

Cyclists of all levels and ages clad in colorful lycra jerseys competed throughout the day in a series of heats culminating in the men’s and women’s pro races, part of the US Cycling Criterium tour.

The Grand Prix, presented by AT&T and benefitting the Glencoe Educational Foundation was a true community event, with Glencoe residents along the track taking in the competition in from the convenience of their front yard.

“When else can you tailgate on your front lawn,” said local Laura Lederer, surrounded by a yard full of chairs.

Families watched as riders zooming by competed in ten different categories ranging from a Kid’s to Master’s races.

Laura Van Gilder, who came into the race ranked second on the tour, took first place in the Women’s pro race thanks largely to a breath-taking sprint to the finish against Erica Allar.

“That was a tough last leg, Erica Allar has been sprinting well all season,” said Van Gilder. “She has been my primary competition so I’m glad to come out and get the win today.”

The men’s pro race was a two-man affair as Jackie Simes and Rudolph Napolitano pulled away from the field early, en route to a nearly two-minute lead on the rest of the field.

Finishing in equally as thrilling style, Napolitano and Simes duked it out to the end of the last sprint with Simes managing to pull away for the win in the end after almost getting knocked into the barricades lining the street.

“I was able to get the better of [Napolitano] at the end of the sprint,” said Simes. “We got a little close there at the end but it was a clean sprint to the finish.”

On hand for all the races was actor Matthew Modine, acting as Grand Marshall of the event.

Modine, who plays Deputy Commissioner Foley in the upcoming Batman movie, The Dark Knight Rises, was on hand as Grand Marshall of the event.

The actor, an avid cyclist attending his first bike race, donated $30,000 worth of bikes to Glencoe Grand Prix-affiliate West Town Bikes as part of his Bicycle For A Day Foundation.

“Riding a bike is something that has an immediate positive effect on the environment as well as our bodies,” said Modine. “The goal for Bicycle For A Day is for there to be a day for the whole world to come together in solidarity against climate change.”

The race has come a long way since it’s inception six years ago, evident by the amount of riders and the skill level of those involved.

“It really couldn’t have gone any better,” said Grand Prix Coordinator Jon Kerr. “We’ve taken steps each year but this time we really got it right.”