Music festivals in America and abroad are beginning to hit critical mass. It’s our generation’s sign of approval to any artist if they find themselves on a bevy of festival lineups come summer, they’re doing something right. Perhaps the most prevalent “music for the people” approach in the industry, festivals allow acts both large and small great opportunities for exposure and listeners the chance to attempt to take it all in. The spring/summer of 2014 is shaping up to be one of the largest festival seasons in recent memory and event organizers have wasted no time announcing jam-packed lineups that look more like an iTunes playlist than a real concert experience. We gathered together lineups from festivals from coast to coast and even beyond to give you the most full, in-depth guide to diving into festival season, check them all out on the following page.

Bonnaroo
Where: Manchester, TN
When: June 12-15
Tickets: http://www.bonnaroo.com/tickets
Featured Artists: Elton John, Kanye West, Jack White, Lionel Richie, Vampire Weekend
Excited To See: Skrillex (SuperJam), Frank Ocean, Broken Bells, A$AP Ferg, James Blake
Overview: Well, Bonnaroo kind of trumped all the other festivals who followed 2014′s popular festival lineup equation: have Outkast and Vampire Weekend headline and figure it out from there. Most festivals this year will be carbon copies of each other, but organizers of Bonaroo stepped it up once again. The king himself, Elton John shows up to headline this year for what should be a truly magical night in the Manchester field. Kanye, who became one of the most hated performers to ever perform at the seminal festival after he made fans wait 4.5 hours for his 2008 set, finally taking the stage around 4:30 AM, forcing Pearl Jam to cut a reunion set short and tweeting: “WE WERE OBVIOUSLY DEALING WITH F*CKING IDIOTS WHO DIDN’T REALLY HAVE THE CAPACITY TO REALLY PUT ON THIS SHOW PROPERLY,” afterwards. Should be one hell of a show (maybe he’ll bring the ‘Yeezus’ mountain!).

Spring Awakening
Where: Soldier Field, Chicago, IL
When: June 13 – 15
Tickets: http://www.ticketmaster.com/event/04004B749BEB4670?camefrom=CFC_SOLDIER_FIELD_SAMF14_7
Featured Artists: Tiesto, Pretty Lights, Kaskade, Diplo, Knife Party, Big Gigantic
Excited to See: Borgore, Eric Prydz, Dillon Francis, Paper Diamond, Datsik
Overview: Spring Awakening is Chicago’s premier EDM festival. The city’s version of Electric Daisy Carnival takes place about 25 miles southwest of the city in Joliet, so it doesn’t count. Put on by top-tier dance promotion team REACT Presents, SAMF is an endless array of neon and glowsticks to keep any rave chick going. The Bears’ home, Soldier Field, is transformed into festival mode with a huge main stage on the field. It is all ages, which makes things weird for festival outfits, and has an early curfew (10 PM), but makes for one of the better day parties you’ll ever go to.

Lollapalooza
Where: Grant Park, Chicago,Il
When: August 1-3
Tickets: http://www.Lollapalooza.com
Featured Artists: Eminem, Skrillex, Kings of Leon, Arctic Monkeys
Excited to See:
Overview: (Yawn). So, Lollapalooza was announced recently and the worst thing to happen to Chicago that doesn’t involve cold weather didn’t even turn out as shiny as organizers would have hoped. The festival, which takes over the city’s Grant Park and lasts for three dreadful days of teenagers in high-wasted shorts and bros in neon tanks, announced their headliners a few weeks ago to almost literal yawns. Eminem and Arctic Monkeys are back, after headlining in 2011, so is Skrillex, who also headlined in 2012 at Perry’s Stage. So, I guess we have the latest from Kings of Leon to get excited about….Honestly though, they couldn’t even get Outkast? After last year’s event I vowed to stay away from there on out and, barring a major surprise in the lead-up to the 2014 edition, there doesn’t seem to be a lot of reasons for me, or any serious music lover, to make the short bike ride to the loop again this year.

Sasquatch Festival
Where: The Gorge Amphitheatre – George, Washington
When: May 23 – 25
Tickets: http://www.stubhub.com/sasquatch-music-festival-tickets/
Featured Artists: Outkast, M.I.A., Queens of the Stone Age, The National
Excited to See: Kid Cudi, Die Antwoord, Chance The Rapper, Tune-Yards, Panda Bear, Cloud Control
Overview: This is one of the craziest, fully packed lineups I’ve ever seen. Sure, Outkast and M.I.A. headline, and Kid Cudi comes out of nowhere, but Tune-Yards and Panda Bear?! Merrill Garbus was a festival darling in 2012, and this is the first inkling we’ve gotten of her return, while Panda Bear branches off from his Animal Collective for a solo gig that shouldn’t disappoint. The festival is actually two, taking place on separate weekends in May and June. The first is not to be missed.

Coachella
When: April 11 – 13
Where: Indio, Calif.
Tickets: http://www.coachella.com/festival-passes/ ($375 single day GA)
Featured Artists: OutKast, Arcade Fire
Excited to See: A$AP Ferg, Chance The Rapper, Broken Bells, Lorde, Foxygen, Disclosure
Overview: The Coachella lineup announcement was the one that really started them all this year, as they broke the news of the sure to be iconic reunion of Andre 3000 & Big Boi as Outkast upon unveiling the full lineup. The two-weekend festival is stocked with the best in music today. Arcade Fire co-headlines, although that hardly holds a candle to the reunion set, and festival newcomers like Chance The Rapper, Lorde, A$AP Ferg and Disclosure pepper the rest of the lineup for what is sure to be a very memorable Coachella 2014.

FireFly Festival
When: June 19 – 22
Where: Dover, DE
Tickets: http://fireflyfestival.com/tickets/ $249 (4-day GA)
Featured Artists: Foo Fighters, OutKast, Jack Johnson
Excited to See: Chance The Rapper, Cherub, Vic Mensa, Childish Gambino, Jake Bugg, Imagine Dragons
Overview: FireFly festival is one that has grown in recent years by keeping a keen eye on up and coming artists and curiously reflecting the blogosphere in the lineup year in and year out. OutKast makes a stop on their reunion tour to headline alongside Jack Johnson and The Foo Fighters while Chicago’s own Vic Mensa heads back out to Dover, this time as a solo act after having played the festival with band Kids These Days in 2012, this time joining close friend Chance The Rapper on the bill. Dance duo Cherub was almost literally made for festival atmospheres and should prove to be the dark horse performer on the full lineup. Organizers kept things eclectic too, mixing in the likes of Imagine Dragons, Jake Bugg, Portugal, The Man and Band of Horses with an inspired hip-hop lineup.

Overview: This is a festival that, it seems, the artists are equally as excited for as the fans attending. Since the announcement of the absolutely jam-packed lineup that is basically a who’s-who of the current music landscape, those on the bill have taken to social media to discuss further. There’s not really a whole lot to say about this festival that hasn’t already been said or isn’t wildly obvious from the announcements regarding it except that London isn’t the most accepting of festivals (Paul McCartney and Bruce Springsteen had their mics cut off while onstage in 2012) and what issue that might pose to the throngs of fans sure to descend on London and Birmingham for the three-day event. 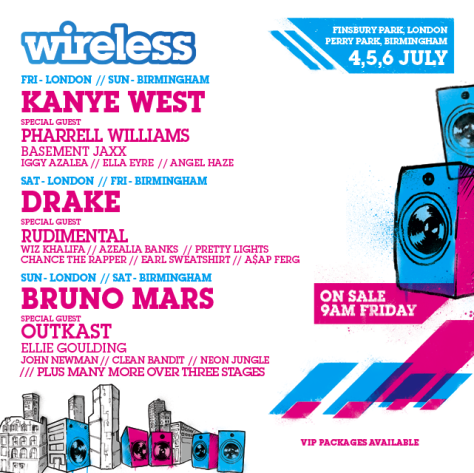 Overview: When referring to festivals that have reached critical mass, on the verge of just being too big, the Ultra Festival series comes to mind. The series, which runs throughout the year, around the world in places like Buenos Aires, Miami and Croatia has exploded in recent years, with so many DJ acts packed onto the lineup, you’re sure to hear ‘that one drop’ at least 15 times during your experience. As an EDM-dabbler, the overload of DJ acts doesn’t really get me going, but for an PLUR-enthusiast, it’s almost literally Christmas. Ultra Europe is the featured event in the company’s wide array, and one look at the first wave of artists should explain why.

Counterpoint
When: April 25 – 27
Where: Kingston Downs, GA
Tickets: http://www.counterpointfestival.com/tickets/
Featured Artists: OutKast, Foster The People, Pretty Lights, STS9
Excited to See: J.Cole, Krewella, Chance The Rapper, Nosaj Thing, xxyyxx, Ratking
Overview: To be honest, Counterpoint is a bit of a new festival for me, but with one of the most impressive lineups this side of Coachella this year. Of course, Outkast is headlining the bill on their monster reunion tour, but the 2014 edition of Counterpoint possesses a lineup that has both range and diversity, both in the notoriety of the acts on-board and the actual number performing. Counterpoint will certainly keep you moving, but probably not pound you into the ground the way Bonaroo will to the unsuspecting rookie. Finding acts like The Polish Amabsssador, XXYYXX, Ratking and Bagheera towards the bottom of the official poster announcement give hope to those early afternoon sets.

Hangout
When: May 16 – 18
Where: Gulf Shores, Alabama
Tickets: http://www.eventbrite.com/e/hangout-music-festival-may-16-17-18-2014-tickets-7448543795
Featured Artists: The Black Keys, Jack Johnson, OutKast, The Killers
Excited to See: The Bloody Beetroots, RDGLDGRN, Chance The Rapper, Portugal, The Man, Allen Stone
Overview: Hangout has been one of the premier summertime festivals for a minute now, combining a great group of artists and acts with a beutiful atmosphere that can make anyone forget that May still means spring elsewhere in the country. While the headliners are a blast from 2005, the rest of the lineup show a ton of promise, from soul singing aficionado Allen Stone, to the Pharrell-backed group of RDGLDGRN to one of the most eclectic and fun EDM acts in the ever low-key Bloody Beetroots who stole the show at last year EDC Chicago. Combine all that with the soulful rollicking of Chance The Rapper, the jams of SOJA and the heavy bass of Pretty Lights and you have one damn fine festival. 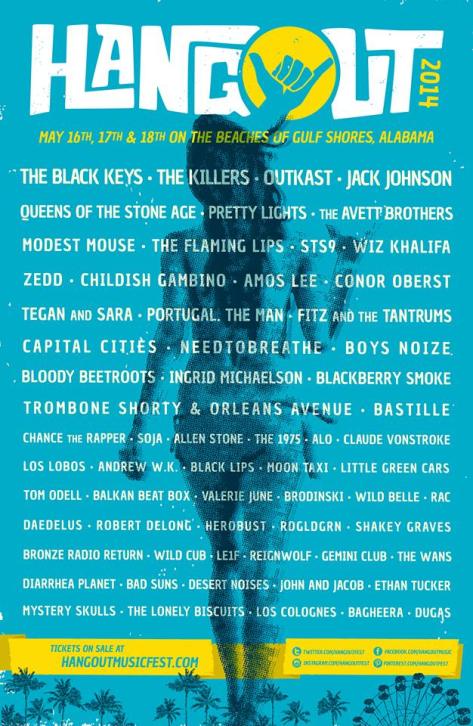 Governor’s Ball
When: June 6 – 8
Where: New York, New York
Tickets: https://www.eventbrite.com/e/the-governors-ball-music-festival-2014-tickets-9469121397
Featured Artists: OutKast, Jack White, Vampire Weekend, The Strokes
Excited to See: Disclosure, James Blake, TV On The Radio, Chance The Rapper, Grimes, Kurt Vile
Overview: Governor’s Ball is annually regarded as one of the most highly-anticipated festivals of the year. Held in New York City, the lineup year in and yearo ut is one to drool over and a logisitical nightmare to anyone trying to make it to everything. This year’s roster is no different, with musical geniuses Outkast and Jack White co-headlining along with Vampire Weekend and The Strokes and a solid lineup behind them that features the likes of Skrillex, Neko Case, Janelle Monae and Run The Jewels. Definitely not one to miss if you can make it out east. 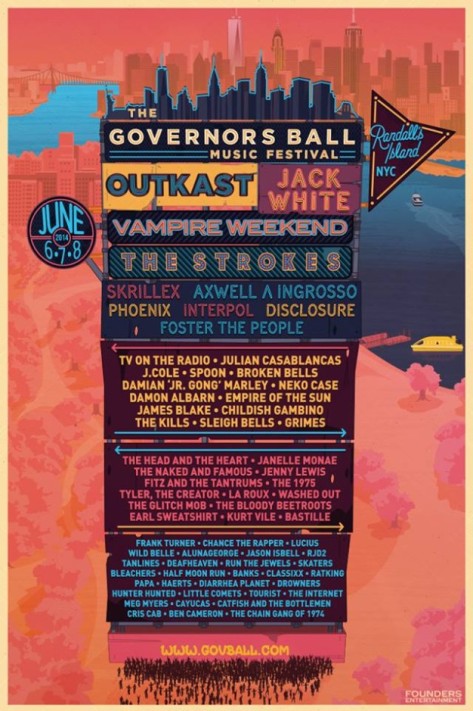 Big Guava
When: May 2 – 4
Where: Tampa, Florida
Tickets: http://www.ticketmaster.com/event/0D004C2ADA6CA065
Featured Artists: OutKast, Vampire Weekend, Foster The People
Excited to See: HAIM, Chance The Rapper, Girl Talk, Vic Mensa, Hoodie Allen
Overview: Big Guava, aside from having one of the best festival names in existence, also is a lightning rod for talented artists. A week after Counterpoint Festival, not far away in Georgia, Big Guava is four stages of musical exploration spread out amongst the Florida State Fairgrounds. Girl Talk returns to the festival scene on the heels of rumored work with rapper Freeway and after an absence from the public eye for a minute, so that’s certainly an act to get excited about, as his add-like mixes damn near were the background music for my college experience. An eclectic hip-hop lineup that includes Vic Mensa, Chance The Rapper, Hoodie Allen, Timeflies and Earl Sweatshirt is one that has the vibes all figured out from the jump. Definitely an overall festival that I’m feeling at the moment. 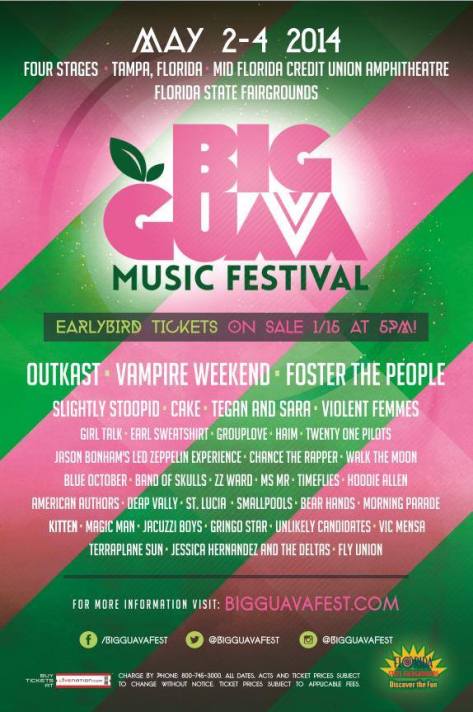